Check out the first instalment of our new author interview series!

untethered recently published Ellie Sawatzky’s story “Retreat” in their current Spring 2017 issue. Sawatzky, a graduate of the University of British Columbia’s MFA program for creative writing, has had work published in numerous places, including Room, SAD Mag, The Puritan, Prairie Fire, and Arc. I got to sit down and talk to her about her new work, her characters, and where her stories come from.

In the opening paragraph of your story, readers are introduced to Nora, the main character. She admires persistence, and likes succulent plants because she can leave them. She’s a great, well-rounded character with a lot of insight in some ways, not in others. How did you come up with this character, and is she based on anyone you know?

I went through a few stages with Nora as a character. This story first came into the world as a narrative poem I wrote called “The House Where My Mother and I Began” and it was a mostly fictionalized conception story. So before Nora was Nora she was this mother figure in my (“my”) conception story. But I actually think there’s a lot of me in Nora, in the way she thinks and processes, and especially her guilty conscience. Usually my characters are based on people I know, or they’re collaged together with bits and pieces of people in my life. Nora’s a collage.

The details of the driving route Nora takes is very vivid and real, as she drives through rural British Columbia. Is this a drive you have done yourself?

I haven’t done the drive as an adult, but my parents lived in northern British Columbia (in Houston, where the story takes place) until I was four, and we went back to visit when I was eleven or twelve. The house and property in the story are inspired by the house I lived in until I was four. Many of the details — such as the garden, the garage, and the outhouse from Nora’s parents’ wedding — come from my own memories of my first home. Nora’s memory of the baby mice comes from one of my own experiences as well. My dad actually gave me a nest of baby mice to play with when I was three or four years old. I think it scarred me a little.

Nora moves between her memories and her reality in this story, and there’s a lot of detail in this story. Are there any memories or moments you cut out, either because it didn’t ring true to Nora’s character, or because you felt it belonged in another story, or part of another project?

So as I said, this story was originally a poem, and when I first wrote it as a short story, I maintained the framing of it as a conception story. So the story unfolded from the perspective of Nora’s future daughter, imagining the events leading up to the moment she was conceived. I was inspired by the Alice Munro story “My Mother’s Dream”. I still like that framing of the story, and I think there’s still an echo of it in this version, but I cut it because I felt I should allow the story to unfold from Nora’s perspective.

Having read a few of your poems and stories at UBC, I noticed that horses and animals show up in your work a lot. Are horses something you grew up around in Ontario?

There were actually horses in the neighbours’ yard in the house we lived in in BC, and I loved them. I always wished I lived on a farm. After we moved to Ontario we had some neighbours who kept goats, and I milked their goats for them when they went away.

I love how art figures into this story, down to the last scene and moment. There is a mention of painters Kandinsky and Pollock, and one character who “smears paint around trying to make sense of the mess.” Nora is sort of doing something similar, trying to put her memories together, and pulling things apart. Is there some relation between this story, and the messy, pulled-together feeling that abstract paintings sometimes have?

Definitely. I intended for Dale’s abstract paintings to function as a metaphor for the messiness of our lives, and the stories of our lives. I think those two things are very different — our lives vs. the different versions of stories we tell ourselves about our lives. How we interpret our lives. And this starts to get especially messy when you factor in other people’s interpretations of your life. For example, Nora’s version of things vs. her brother Jack’s version of things. Nora and Dale are on the same journey, in that they’re both trying to make sense of their messy lives, and they are both working through this on a surface level — Dale by smearing paint around, and Nora by cleaning all the junk out of her childhood home.

Nora “had once read that birthmarks were caused by unsatisfied wishes of the mother during pregnancy.” Was that something you heard growing up, or something you came across in a book, or the internet?

I can’t actually remember where I read that. I think I may have just been googling random things (as I do) and came across it on Wikipedia or something like that.

There are a lot of details that tell readers something about the characters and environment in this story. Is that how a story comes to you, through these little details, or is it based on a personal moment, something you read in the newspaper?

It’s usually a landscape that comes to me first, and with that come the little details of that landscape, the trees, plants, roads, houses. Then I can start to build the narrative, once I’ve imagined that place.

Is this story part of a larger project, a series of stories or a manuscript?

Yes. This story is from my short story manuscript, The Study of Hidden Animals.

If you’d like to read Ellie’s story, “Retreat”, you can order a copy of untethered 3.2 here. 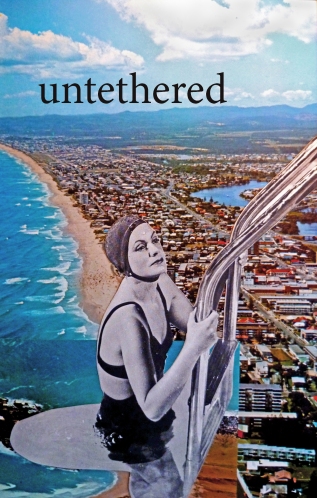 One of our editors, Stephanie McKechnie, at the #internationalwomensday March in Toronto today! Happy #internationalwomensday2020! #IWD #iwd2020
Issue 5.1 launch party photos 2 of 2 🎉 #canlit #litmag #litmaglove #launch #launchparty #reading #poetry #shortfiction #nonfiction
Issue 5.1 launch party photos 1 of 2 🎉 #canlit #litmag #litmaglove #launch #launchparty #reading #poetry #shortfiction #nonfiction
#Repost @jessamand ・・・ Thrilled to receive my copy of @untetheredmag today and to see my work alongside so many talented folks!
One of our amazing past contributors, Michael Russell, is launching his DEBUT chapbook Grindr Opera this Thursday! A poem from the collection called “Ode to Grindr” was originally published in untethered 🎉 don’t miss it!! #Repost @michael.russell.poet ・・・ ☝LINK IN BIO☝ I'm launching my first chapbook Grindr Opera @gladdaybookshop on January 23 7-9pm. Come celebrate with me @j_starfall and @beth_murch . And visual art by @michelle.max.fry . Come laugh and cry and get lost in your feelings with us! #poet #poetry #queerlit #canlit #bear #cub #gay #instagay #lgbtq #toronto #grief #lust #grindr #pride #mentalillness #writing #music #spokenword #queerpoetry #grindropera
#Repost @victoria_mbabazi ・・・ Top three fave things: 1. Fries 2. Potatoes in any other form 3. Watching Deborah slay the whole crowd with recipe poem If you weren’t lucky enough to witness the Piscean greatness like me you can find her poem (and my two poems) in the latest issue of @untetheredmag
%d bloggers like this: